Review of Leah Lievrouw‘s Book “Alternative and Activist New Media” 2011 (294 pagesAs the title says, this book is an overview of the way activists, artists and civil society use media around the globe to talk, resist, share, criticize or create their content, views about anything and everything, to support or confront popular media practices. It’s equally useful for general public as well as to media scholars and practitioners. Lievrouw covers the historical and contemporary practices in alternative media, social movements, and activists art by quoting both theoretical and practical examples. This study also traces relevant case studies to analyze the alternative media practices and activism of new media and society. One can understand the trendiest areas of new media while 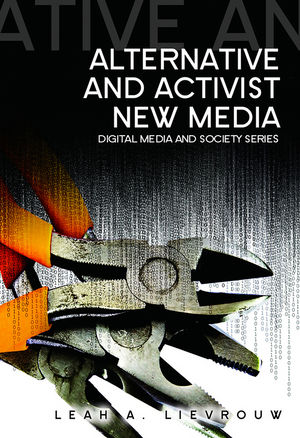 Since the beginning few institutions dominated as well as controlled media and information. In other words, throughout the 20th century industrial style information system has been used in almost all kinds media content. Media’s main purpose from sharing of information or to provide access to information changed to feeding the specific information, gatekeeping and to control in the name of freedom (Butsch, 2003). But over the thirty years proliferation and convergence of networked media gave new birth to communication and engagement. That’s how roles changed. Media audiences and consumers became users and participants. Before media content was delivered through particular platforms, such as books, newspapers, magazines, radio, television, cinema, and video games. But now traditional model of information is giving way to alternative use of media as it’s faster, looser and cheaper (Atton, 2015).  On the other hand, new media ecology posed few problems that includes social equity and solidarity, privacy and security, politics and economic, participation, freedom and control, expert verses popular knowledge. The journey from pre-browser internet to web 2.0 catered both pipeline and frontier views of new media. This book discusses genres of contemporary media having cultural and conceptual roots of alternative and activists perspective. The author gives theoretical account on communication process, creative industry and media culture. Though the concept of mediation is not new and all about the use of technology to enhance communication, participation, creation and sharing while covering both modes of reconfiguration and remediation.

New media itself is defined as a information and communication technologies and their social status including it’s three constituting components like material artifacts, communication activists or participants and social arrangements. Lievrouw explained that media is a product of people’s ideas, decisions and actions but it could be used in other ways and evolved. Some techniques and their usage becomes a routine and we don’t think in alternative ways to use the same media that makes it monotonous. But when someone use it differently that sounds more innovative. New media has more capability to be used as alternative and activist new media due to having multiple features giving it an edge on mass media. For instance, Hybrid or recombinant technologies, connectivity, networking, ubiquity and interactivity. Although new media is available to more people than ever before but it gives rise to digital divide as well. Somehow, alternative usage can overcome that.

Lievrouw also defines alternative and activist new media as well as it’s formation. Such as print, radio, audio, video, street art, memes etc. Alternative media provide resistance to the colonization of online corporates (Dahlberg, 2005). Over last few decades, it broke the monopoly of mass media and the controlling authorities though it’s not completely free. As major online corporates have some control on visibility of online content through logarithms and related tools.

The cultural roots of alternative and activist new media can be found between today’s remixed culture to as back as the ideology of Dada which emerged in World War-I who was technological innovation in photography, cinema, typography, sculpture and theatre. Dadians used almost all the available forms of expression in different ways to express themselves and the society. While referring to social and political roots, author used social movement theory to highlight the emergence of new social movements like labor movement, civil rights movement, anti-war movement etc.

Author refers to genre framework along with genre theory and emphasizes that genres are useful as they make communication recognizable and understandable, create and maintain social contexts, establish different worldviews, recognizable as a sign of membership in a particular community, active rather than fixed or static as well as dynamic.  But genres don’t stand alone and employed by community in combinations for interactions and make genre systems. Generally, there are three major themes the scope or size of active project, the stance of movements and project relativity to society and culture, the nature of project as action and agents of change connects activist art movements, new social movements and online activism.

First genre, culture jamming is all about the strategies employed by social movements to disrupt or subvert media culture and it’s formal institutions that includes corporate advertising etc. Culture jamming has been termed as artistic terrorism by Derry back in 1990 because of it’s rebellion setting (Derry, 1990). All culture jamming actions have a central intention: to challenge or disrupt dominant discourse with a dose of subversion and creativity.   They often use the same tools as mass media and marketing to create their disruptions. It borrows, comments and subverts elements from popular culture like entertainment, advertising, art, music, literature and cinema. It critique mainstream culture, specially corporate capitalism, commercialization and consumerism. World wide web gave rise to the adaptation of traditional media strategies in new emerging media. It has different forms like images, sounds, text from popular culture, graffiti art, billboards etc. The practice of culture jamming is adopted from offline media projects of commercial images and public spaces. The term which was coined in 1984 and in practice even before that, went online  by 1990 by adaptation of familiar media strategies in cyberspace and expands to reverse jamming as well.

Second genre, alternative computing is also called unconventional computing that aims for ease and performance (Fitzgerald, 2014). It timely critiques and reconfigures the structure of information and communication technologies. It is related to hardware, software, institutional power and gatekeeping. It has various forms like hacking, open source system, design and file sharing, The purpose is to provide and have open access to and use of information technology. The notions of hacker and hacking which were considered as malicious for more than two decades and still used as a synonym for vandal, thief or terrorist  moves to the open access and community sharing practices and leading to free press.

Third genre, participatory journalism is a practice in which common people play an important role in collecting, editing and disseminating of information or news. It’s also called citizen journalism or street journalism (Thurman and Hermida, 2010). In this practice volunteers or amateur applies the ethics and practices of professional journalism to give voice to under-reported and invisible groups as well as to investigate and highlight neglected issues. Mostly found in forms of online news services, blogs and interactive media. For instance Google and Amazon are merged as Googlezon to dominant the online culture by harvesting content from traditional media and serve individual consumers and knowing their priorities through algorithm. Participatory journalism threaten the monopoly of mainstream media and leads to the crisis of press. In addition to that citizen journalism is a shift of power and control from major media corporations to general public.  Though critiques consider it as a danger for ethical media, professional journalism and democracy.

Forth genre mediated mobilization is more like getting people on the street that extends and activates the strength of live, local social relations and organization like kinship and social support networks, professional affiliations or expert advice network through social media, mobs, virtual worlds and blogs. The aim is to activate mobilization in lifestyle, politics, social movements and cultural reforms. Not only the participants of a social movement but the people who witness such movements also experience social change. New media makes communication and mobilization for social movements instant, interactive and timely as it happened in global justice movement. The literature on global justice movement highlights three aims or networked communication technology; an indispensable tool to coordinate and direct diverse groups, a platform to produce and distribute content, electronic civil disobedience or electronic/online protests. In Pakistan, it has been used for political and religious purposes. Several times, it has been used to exploit the situation, to gather people, manipulate them with false or altered information. To provoke them for massive destructions. The recent killing of a university student Mashal Khan by mob is a clear example of it (R. 2017).

Fifth genre is common knowledge which is actually closer to challenging the experts. It’s projects are about reorganizing and categorizing information through tagging, bookmarking, creating wikis or crowdsourcing in order to mobilize and facilitate outsider amateur knowledge. It covers the facilitation from collaboration to crowdsourcing that is another way to equal empowerment and access for anyone and everyone. Critics mentions three problems of such projects; firstly, these projects could be exploitative as depends on volunteer contributions or free labor. Such projects creates alienation, enrich the investor but labor remain unpaid. Secondly, collective knowledge production comes from critics and amateurs and compete the experts. Thirdly, collective knowledge project have no sense of quality. But these objections are not discouraging rather constructive for common knowledge projects and open up more space for innovation and creation.

To summarize, author analyzes and gives a broad summary of emerging alternative and activist new media, its scope and practices. We can conclude the consideration of mediation useful for theorizing and empirical research about communication and technology as well as new media and society. In past, only few corporations had access to resources which resulted in the form of monopolized media (Chomsky, 1997). Even now, elite media dominates somehow but not the only power. Anyone with phone or tablet have access to viewers, readers in fact general public without any limitation of borders, time or space. Though, there is still need to deal with the check and control of online media corporates which effects visibility and privacy.  But the alternative and activist media projects may be models to understand mediation, communication and social change. Almost all the practices were existed in mass media before the takeover of new media. But the alternative and activist usage transformed the sphere and brought revolutionary outcomes in communication and information. All the five genres of alternative and activist new media are back rooted in history as well and work in more powerful way in emerging media separately and in combinations. Collectively, this book is an informative and interesting study that how new media can challenge powerful elite media in alternative and activist ways. It’s another way of power sharing.

Dahlberg, L. (2005). The Corporate Colonization of Online Attention and the Marginalization of Critical Communication? Journal of Communication Inquiry,29(2), 160-180. Retrieved June 1, 2017, from https://msu.edu/~jmonberg/415/Schedule_files/Dahlberg.pdf.